Get It Write–not exactly the same as Get It Perfect, is it? I do the very best I can when I know something’s going to see publication and will revise till the cows come home, if I think I’m making it better. Recently, though, I’ve been coming to a whole new understanding of imperfection.

About a year ago, I pieced a new quilt top, the first in years. What turned me on was seeing some great fabrics in the sewing machine repair shop when I took my old Singer for a tune-up. I had no idea what I’d do with them, but they called to me, and I gave in without a struggle. Not incidentally, the quilt I’ve been sleeping under since I finished it 45 years ago was showing signs of needing to retire before I wore it out completely.

I’d made a fair number of quilts and comforters since that one and admired hundreds more in museums and quilt shows and shops. Collected a shelf of quilt books that rivals our local library’s. The first, the Mountain Mist Blue Book (put out by a company that makes quilt batting, the inside layer), taught me what I needed to know to risk starting a craft my two grandmothers enjoyed. One liked piecing tops; the other preferred quilting the layers together. I inherited quilts pieced by Grandma Saulmon and quilted by Grandma Hoskinson. But they’d both died by the time I was learning to talk. So I taught myself by living under their quilts and reading books.

When I started writing mysteries, it was only natural to set one of them in a quilt show. Buried in Quilts has my community orchestra playing an all-American concert in the historic building that houses the show, very much like the one that used to house a real quilt show in Centerville, Indiana. Maybe it still does. I had a lot of fun writing that one. Once was enough for me, though some crafty writers feature quilts in many books. No, I almost forgot Dear Mary Ellen, one of the little books I wrote for adults learning to read. A quilting bee is at the heart of that slightly spooky story about a new bride in her sixties.

Way back when, my mother-in-law gave me what I’m sure is a homemade quilting frame. Or frames–you hear people say both. It’s two long poles and two sawhorse-shaped supports, much lighter than real sawhorses. The poles fit into holes in each support, and wooden ratchets keep them from spinning, so that you can tighten the quilt in the frame once its layers are tacked onto the poles.

Clear as mud if you haven’t seen it, I know. And hard to explain. After all those years of quilting on it, I needed to try explaining how it worked, because the teeth on the ratchet wheels were worn, one almost to nubbins. So I went looking for someone to make me new ones. Took the less worn one as a sample to a woodworker in nearby Brown County. But he was more interested in sculpting a horse out of a log with a chain saw. 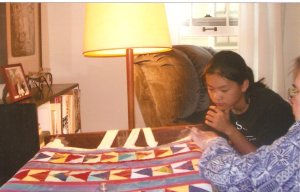 On the way home, I thought of the high school shop teacher. He said sure, and the next day his student produced just the wheels I needed out of some lovely dry walnut he just happened to have lying around. Here they are in action–if you look closely, you can see them. You might even see the flipper things that fit into the teeth, which face in opposite directions to keep the quilt taut, though I’m afraid they’re almost invisible unless you can zoom in. That’s way more than you want to know about them, and as much as I can explain, except to say that they work.

The pattern of the pieced top is called Flying Geese, but it’s my variation on that traditional pattern. I played around with it, and I’m quilting it freehand, not by drawing lines on the fabric. Is it perfect? Not even close. Oh, I keep my stitches as tiny as I can, rocking the needle in my right hand until it touches the brave left forefinger below that signals time to rock up again. It’s a peaceful process, letting my mind wander free to anything I please. 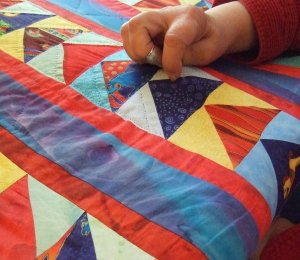 It’s the peace and freedom that surprised me this time around. I don’t remember feeling so free when I made the one on my bed, maybe because I had little children underfoot back then. Sure, if I notice an ugly stitch in time, I’ll slip it out and do it over. But mostly I relax into the rocking and watch lines of quilting grow, turning the flat surface you see in the first picture, taken when I was just starting to quilt it, into something with texture. It’s hard to stop when I have jobs to do, but this summer I have the freedom to keep on going much of the time. And enjoy it.

Then one day I heard the voices of both my parents in my head, and I knew why I felt so peaceful. They admired good work, both of them, but they knew how to live with imperfection. My dad played piano, mostly by ear. He used to say, “Anything worth doing is worth doing badly. If you can’t play like Horowitz, play like Hoskinson.”

Mom, a demon knitter, among her other talents, would say about a wrong stitch it was too late to fix, “You’ll never notice it on a galloping mule.”

They were both right. So I relax and keep on rocking and stitching. And the lines, imperfect though they be, keep growing.